Situated at the south-west extremity of Neuchâtel Lake, Yverdon-les-Bains is a city with a long history. Its origins are prehistoric and the oldest traces are the menhirs, visible at the place known as Clendy, which have been dressed at the beginning of the middle neolithic (4500-4000 BC).Several villages occupied between 4000 and 2000 BC are known in the area.

During the Celtic period, a town is built on an old offshore bar, on the lakeside, at about 1 kilometre far from the menhirs. About 80 BC, the town is protected by a rampart discovered during the graves in the 1990's. During, the Roman period, there is still a town and several monuments are built (baths, sanctuary,...). Afters the first Germanic invasions, a castrum (fortress) is built at the place of the civil town. After the start of the Roman legions, the ramparts of the castrum protect during a certain period the civil population.

In 1260, a new city is created by duke Peter of Savoy. This city, closer to the lake as it receded since the roman period, is the nowadays centre of the city. Its ramparts are improved during the 16th and 17th centuries, and it is only since the end of the 18th century that the city grows outside the ramparts. 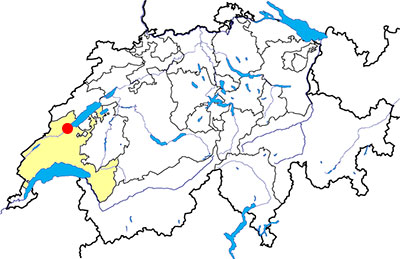 Others visible sites in the area

The set of menhirs of Clendy is the most important megalithic site of Switzerland. The site is nowadays in a clearing, near the lakeside. The 45 menhirs have been discovered near 1878, but the were only freed in 1975 and restored in 1986.

The height of the menhirs is various, the smallest one is 35 centimetres high, and the biggest one is 4.5 metres high. For their preservation, the smallest menhirs are now in the “Musée d’Yverdon et région” (medieval castle of Yverdon) and copies made in concrete are visible on the site. Most of the menhirs have been cut in the purpose of giving them a human or a geometric shape. The oldest menhirs, compared to the engraved menhirs of Britain, are dated form the middle neolithic (4500-4000 BC). The set is formed of two alignments of 50 metres long, and of four sets arranged in an arc of a circle.

Remains of Celtic dwellings dating from the 4th century BC have been documented, but the rampart of the oppidum was only built around 80 BC. It protects the town on the east, north and south sides over an area of about 3 to 4 hectares. A wooden statue, probably representing a deity, had been erected near a gate of the rampart, then buried when it was abandoned around 50 BC.

Several sections of the rampart of the Celtic oppidum were studied during excavations between the end of the 20th and the beginning of the 21st century. The remains of this rampart are not visible in their original location, but several beams and the wooden statue are preserved in the museum of Yverdon and region. In Castrum Park, the location of a section of the rampart is marked on the ground by a series of concrete blocks with a small information panel.

Marking of the oppidum rampart in the Castrum Square

Wooden beam elements of the rampart

Scale model of the rampart

The main visible Roman remains are the ones of the castrum, in the area of the modern cemetery. This fortress was the the third biggest in Switzerland, after the ones of Geneva and Kaiseraugst (AG). Built near 325 AD, it was diamond-shaped and protected an area of two hectares. The ramparts had 15 towers and two gates. The castrum was also protected on the North by the river Thiele and on the South by the swamps of the plain of the Orbe river. An important public bathhouse, excavated at the beginning of the 20th century, is the only known public building inside the fortress. These baths, which are not visible, are currently covered by the Rue des Jordils.

Thanks to an app for smartphones and tablets and enhanced reality, visitors can explore a digital version of the castrum. The app can be downloaded for free; tablets can also be hired at the tourist office and the Yverdon and Region Museum.

East gate of the castrum: excavations by Albert Naef in 1903

Administrative building transformed into a granary

Marking of the rampart inside the modern cemetery

South-west corner tower of the castrum: excavations by Albert Naef in 1903

Marking of the West gate in the Valentin street

The castle and the medieval city

The castle has been built in 1260 by duke Peter of Savoy, to replace an older castle built in 1235. Damaged because of two fires in 1378 and 1476, it was rebuilt every time. It is rectangular-shape with a circular tower at each corner, with the dungeon at the south-east. It has been successively used as fortress, residence for the bailiff of Bern, institute managed by the educationalist Pestalozzi, boarding school, and museum of Yverdon.

The ancient city has kept the shape of the town created by Peter of Savoy. After the fire that partially destroyed it, the town has been rebuilt and expanded. The ramparts protect the town until the end of the 18th century, then they are progressively demolished to allow the town to grow. Nowadays, it remains few vestiges of the medieval ramparts, but it is possible to visit the castle in which there are the museum of Yverdon and area (musée d’Yverdon et région: history of the area and archaeological collection from various regional sites (oppidum of Sermuz, gallo-roman villa of Yvonand-Mordagne,...), Gallo-Roman boats, Egyptian mummy) and the Fashion Swiss Museum.

View of the castle from Pestalozzi Square

Site of the rampart in Pestalozzi Street